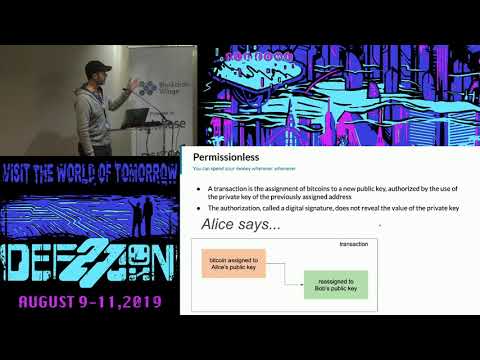 Breaking Bitcoin Hardware Wallets in the next DEFCON 25

At DEFCON 21, just bought Bitcoin from this portable ATM that accepts coins and instantly spits out wallets

Monero Community Workgroup is preparing for the large growth ahead

Diego (u/rehrar), Doug (u/needmoney90), and Justin (u/SamsungGalaxayPlayer) would like to share some exciting news regarding the Monero Community Workgroup (MCW). The Monero community is growing, and so is our support and group of volunteers. The TL;DR is that you can expect some cool things as we grow.

The MCW initially began as the Monero Marketing Workgroup in March 2017. Diego was interested in helping grow the Monero community, so he contacted Justin and set up the MoneroMarketing subreddit. At the time, the idea of a Monero marketing initiative shocked many in the community, who greatly appreciated Monero's general distance from the marketing efforts by many ICOs and scams around that time.
The Monero Marketing Workgroup focused mostly on preparing educational materials and getting people involved to work on Monero-related initiatives. Shortly after the workgroup began, it transitioned into an area that needed more love: community organization and communication.
Up until this point, the Monero community was focused around the developer meetings and the Monero subreddit. While these are still highly relevant in the Monero ecosystem (for good reason), there wasn't a great way for people to stay updated with the latest news and to discuss non-development items. The Monero Community Crowdfunding System (at the time Forum Funding System) submissions weren't discussed in the same way that they are today, and there was no central Community Workgroup to help bring initiatives together. It was obvious that with a larger, more diverse Monero community, a dedicated set of resources would be necessary to connect all these projects together.
The Monero Marketing Workgroup became the Monero Community Workgroup during the first Community Workgroup meeting on 18 June 2017. These meetings have largely occurred every other Saturday ever since and serve as an essential community service to discuss CCS proposals, hear workgroup updates and news, and discuss new ideas. The Community Workgroup channel (#monero-community) is used for many other purposes, including other scheduled meetings on deemed-necessary items of interest and regular feedback, questions, and chat.
On 7 October 2017, the workgroup hosted its first Coffee Chat, a casual conversation covering the month's recent news and most important discussion topics. These Coffee Chats help humanize the Monero community, who until this point typically were only known by their pseudonyms. The MCW played a part in the Monero Konferenco, Critical Decentralization Cluster at the Chaos Communication Congress, and Monero Village at Defcon livestreams and derived content. It also hosts Breaking Monero, a series that features members from the Monero Research Lab who discuss Monero's limitations.
A year after the MCW became its new name, the newly-founded Monero Outreach Workgroup took over many of its initial ambitions in June 2018. Other related workgroups like Monero Ecosystem have their own communities and functions.

The Monero communities are significantly larger than they were back in early-2017, and they keep on growing. In early-2017, there were no mobile wallets, the GUI was only 3 months old, there were far fewer exchanges, etc. Today, Monero has one of the largest, most respected, and most passionate communities. We have the third largest number of developers of any cryptocurrency project, we are the only project with our own DEF CON village, and we are one of the few names that everybody knows. Awesome work to everyone around, truly.
With larger communities comes more work. The community deserves reliable, appropriate resources to sustain this growth. In a decentralized community, this is difficult. Monero Core provides some essential services such as the CCS, getmonero.org, Mattermost, and GitLab. However, they have been unable to meet the growing needs of the community alone. Thus, the MCW has been happy to support other needs to the extent possible: we discuss CCS proposals during our meetings, host several servers, organize Coffee Chats and conference talks, and more, along with efforts of other workgroups. These have become such a significant undertaking, and that's a good thing. As Monero continues to set the gold standard for cryptocurrencies the expectations keep growing. It's awesome to be a part of something where so many people care.

The MCW has grown too much for the three of us to organize all the resources we need, let alone the needs of everyone in the Monero communities and workgroups. Thus, we are furthering our commitment and offering substantially more services in the coming months. To get there, we need your support to fill volunteer leadership and support positions.
Expect the following dedicated services from us:
We need your help to make this happen! We will form "task forces" to focus on certain areas like marketing, system administration, meetings, moderation, and finance. If you have any of these skills, please join #monero-community and say hi, or shoot us an email ([email protected])!
Doug, Diego, and Justin feel that these changes will allow the Monero community to grow in new ways and continue collaborating. The community consists of many workgroups that focus on projects that they are interested in, and we want to support the efforts of these communities.
To allow these changes, Justin will form an LLC, with him and Doug being officially on the board, and Diego taking an advisory role.
Creating a legal entity serves two distinct purposes. First, it allows us to aggregate payments from many people into a single entity to pay the costs for hosting various community servers/services. This greatly reduces our own workload and out of pocket payment. Secondly, it allows us to aggregate multiple social media handles that are currently controlled by individuals under a single entity, to reduce the "Bus Factor."
Of course, the MCW will remain very much grounded in the ideals that made that made it great in the first place. And the entity will always support the Monero communities, never claim to fully represent everyone involved in Monero. It can only ever represent the efforts of those involved.
Current and future goals of the MCW include:

Q: Why does the MCW think that an LLC is needed?
A: For two primary reasons. First, payments. As mentioned, there is existing digital infrastructure, currently paid out of pocket by MCW leaders. Even if a CCS proposal was to be explored, it would make personal accounting and tax reporting very difficult as assets would technically be mixed with personal assets, throwing off capital gains calculations. Up until now this has been a sacrifice of time that we were content to make, but as we continue to ramp up our goals it is becoming increasingly cumbersome, and alternative methods are needed. An LLC would be able to hold these monetary assets as its own entity, and all funds could be kept separate from personal funds, leading to much easier accounting all around.
Secondly, an LLC would allow for digital infrastructure to come under the legal purview of several people, reducing the possibility for any particular person going rogue and decimating what has been built. There may be concern about bringing resources under a corporation, and that this is not in the spirit of Monero, but one thing to note is that all assets and services (noted above) are FOSS/CC. Meaning if at any time a community doesn't care for what the MCW accomplishes under this LLC, they can simply start their own infrastructure with low switching costs. Once again: EVERYTHING IS FOSS/CC.
Q: Why not a nonprofit, cooperative, or other type of organization?
A: While not out of the question, these take additional effort. We hope to grow into these organization types with the help of others. However certain registrations take a lot of time and effort, plus has quite significant restrictions on activities. The LLC will allow us the flexibility and convenience we need now, especially when we currently have no income anyway.

The MCW has a mountain range of opportunities ahead of it, as do all Monero communities and workgroups. We hope that our efforts are of use to you and others, and we hope that you join us in making something great :)
Justin, Diego, and Doug

Breaking Hardware Wallets in the next DEFCON 25 • r/Bitcoin

yBitcoin table is ready for DEFCON tomorrow, will be distributing over 3,000 magazines! Feel free to come by and talk some Bitcoin with our team

Defcon, Satoshi Square, and the Bitcoin ATM briefcase. Props to @__gbg__ and 262 for bringing such massive attention to bitcoin with this project. Seriously a dozen people deep to see this ATM in action all day long.

Breaking Bitcoin Hardware Wallets in the next DEFCON 25

Bitcoin mentioned around Reddit: 🚨🚨🚨[DEFCON 1]🚨🚨🚨 4CHAN HAS BEEN COMPROMISED WITH SOME KIND OF MALWARE DROPPER/BITCOIN MINER, UPDATE YOUR AD BLOCKERS IMMEDIATELY /r/topnotchshitposting